Eleanor Goldstein is a member of the National Association of Women Artists, NY Artists Circle, the Upstream Gallery in Hastings, NY, and is a Signature Member of the Pastel Society of America. Ms. Goldstein is a Wurlitzer Foundation Fellow. Her work was commissioned by the Cathedral of St. John the Divine, NYC; selected by the United States Art in the Embassies Program; exhibited at the Rockefeller Gallery in Pocantico Hills, NY; as well as other galleries and museums in the United States and in private collections abroad.

Recent shows at Williamsburg Art & Historical Center (WAH), and SITE: Brooklyn, as well as at the Noyes and Monmouth Museums.

Showed in 2018: “Messenger” a work chosen by the Woodson Art Museum in Wisconsin to tour as part of their “Birds in Art 2017,” to a number of nature centers and art museums around the country for 18 months. And “Fly Over Tetons” which was included in “Atmospheric Persepectives: Contemporary Approaches to a Traditional Technique” as part of a curated collection of New York Artists Circle works presented by Chashama.

Currently she is developing a body of work inspired by a trip to Greenland the aim of which is to honor the majestic bodies of icebergs predicted to disappear by 2030 due to earth warming. 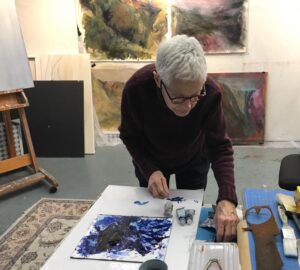 My work evokes emotion through the investigation of both natural and urban environments, exploring themes of death and rebirth throughout.

Each subject is drawn from striking industrial landscapes and transcendent forms from nature that I encounter. I am particularly interested in the cyclical relationship of decay and rejuvenation in urban surroundings. The deterioration of these exciting icons of our progress are captured in a variety of media.

In 2018, I travelled to Greenland to witness glaciers which are threatened by climate change. I have been chasing the experience in my studio ever since, especially in the icescapes series of works (Requiem, Night Shadows).

These images flow freely between the abstract and the real, and light is used both to inform and to obscure. The viewer is invited to journey to places that are almost familiar.